If you’re gearing up for Halloween but still can’t decide who/what on earth to dress up as, then why not consider giving Love/Hate‘s Nidge or RTE News legend Anne Doyle a go?

Forget about spending a ridiculous amount of money in one of those pop up costume caves (the queue would be enough to put you off) and make a beeline for mammy’s wardrobe or the second hand shop, because your very own Aengus Mac Grianna might just be lurking beneath that pile of plastic bags you forgot you held on to.

1. ANNE DOYLE
Dressing up as this legend of the RTE News Room quite simply couldn’t be any easier. Plus, she’s rather topical at the moment, given her recent ‘Gangsta Rap’ antics, and that all-important cameo in the latest Anchorman: The Legend of Ron Burgundy trailer.

There are quite a few ‘Doyler’ looks to choose from too, making Anne quite the versatile costume choice. For instance, ‘Vintage Anne’ (1) requires little more than a brown bob and bland blouse.

Then there’s Retro Anne (2): Raid mammy’s wardrobe for an oul psychedelic blouse, get a blonde wig and have a good hack at it with the scissors, and sort yourself some swish beads to complete the ensemble.

‘Serious News Room Anne’ (3) will probably prove one of the most popular this Halloween, as her ensemble is somewhat ‘hipster’ in appearance. A nice embellished or embroidered blouse, snazzy blazer and some seriously large frames are all you will need to pull this look off.

Finally, we come to ‘Noughties Anne’, which is arguably the most cost effective option. Nab a red blazer, get yourself some pearls and have a poke around Penneys for a cheap blonde wig. You’ll be delivering bulletins from behind the kitchen table in no time. 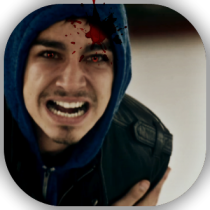 Darren
Easily one of the most popular choices this year, dead or alive Darren doesn’t require too much effort. Get yourself an eyebrow pencil or some very dark lip liner to create that all important facial fluff, root out a blue hoodie and/or a leather jacket and, if you’re feeling really adventurous, complete the look with some fake blood to emulate that gunshot wound to the head.

Bambi eyes will give you a distinct advantage over other wannabe Dazzlers.

Nidge
If you feel like going the whole hog for Halloween then you might consider shaving your head, but if doing a Lizzie on it isn’t your thing then nab yourself one of those trusty flesh coloured hats or get a white swimming cap and go to town on it with foundation. Nidge’s looks vary from brothel chic (your jocks and socks and some neon animal print bed sheets) to wedding/Communion Day suit and tie and, of course, your standard tracksuit top and jeans combo. As long as you’re packing the paranoia to boot you’ll be sorted.

Trish
Getting the Love/Hate look for girls isn’t too hard, especially when you’ve got Dublin’s number one gangster’s moll to take inspiration from. Crack out those hair extensions, get your glad rags on, pull out that Trish pout and now you’re suckin diesel. Think footballers’ wives, Dub style.

Tommy
Love/Hate’s new resident heartthrob has been sporting a blue hoodie of his own lately, but we all know there are only two components needed for the authentic ‘Tommy’ look:  A black jumper and a large bottle or can of the finest fizzy orange in the land. If you’ve got a friend heading along to the same party as Nidge, tell them to leave the golf club at home, yeah?

Fran
Ok so costume shops are technically a no-go area, but if you can get your hands on that infamous Tiger Kidnapping mask then all you’ll need is any oul tracksuit or zippy top and jeans combo. Knocking out your front teeth for authenticity is entirely optional but not advised.

3. BIDDY, MILEY & FIDELMA
There are no end of Irish duos (Mary and Marty, Daithi and Maura, Dobbo and Sharon Ní Bheoláin) but when it comes to trios Biddy, Miley and Fidelma are probably one of the most infamous. You’ll need a fair few wooly jumpers and a few pairs of wellies, a box of Daz for Biddy, some scraggly grey hair for Miley, and of course, for Fidelma, a whole bale of hay in your hair. Duurty.

4. AENGUS MAC GRIANNA
A bit of fake bake, a snazzy suit and tie combo, and that all-important compact mirror. Sure lads, it quite simply doesn’t get easier than that.

5.  FATHER TED AND DOUGAL
Cut signs and white collars out of the Cornflakes box, get yourselves some nice anoraks, and remember to be careful now.