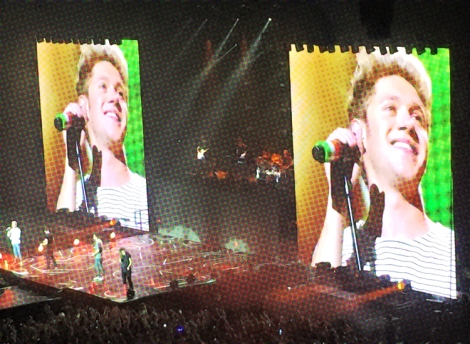 “HOW COULD THEY DO THAT TO US?” screams a little girl in a One Direction t-shirt as the 3Arena’s screens fade back to black after an ad for the band’s upcoming Made In The AM brings the house down.

“Calm down now” her mother urges. “I can’t calm down”, she replies matter of factly. And neither can the crowd who’ve gathered for the first of three sold out One Direction gigs at the venue formerly known as The Point Depot.

It’s a little less than 18 months since the band – then a five piece – took to the stage in Dublin’s Croke Park, and while the packed Indigo Zone of the hallowed GAA ground seems miles away now the audience is just as excited, and a lot happier not to be at the mercy of the elements.

When the lights go down the familiar phones, tablets and digital cameras fly up. And by the time One Direction arrive to an ear-splitting welcome, you’d be forgiven for thinking nothing had changed since last May.

Tearing through an action packed set that includes lesser known album tracks like Clouds and mega hits like Best Song Ever, Louis, Liam, Harry and Niall seem genuinely overwhelmed by the reception. At least from what we can see of them through the lens of the eager fan in the row in front’s ever aloft digital camera.

There are the stereotypical “loudest crowd ever” audience pleasing clichés, but when local lad Niall opens his mouth, the screams are genuinely deafening.

They may be one of the biggest bands/commercial entities on the planet, but when One Direction come to Ireland they’re so much more than that. Here, on Horan’s home turf, they’re proof that a lad from Mullingar with a guitar can do what the Irish do best – punch above his little country’s weight.

And he can do it all without forgetting the most important thing of all – home. Some might say that’s what makes him beautiful in the eyes of his Irish fans.

Horan’s homecomings have always been special. At last year’s Croke Park gigs his on stage chatter with Harry Styles about his beloved Mullingar and the Dublin-Sligo train certainly served to prove that.

The opening night of On The Road Again is laden with similar treats. Harry thanks Ireland for lending Niall to the band, and even cracks out his now world famous impressions of the Dublin and Mullingar accents.

“I’m just going to get this out of the way” he jokes, before launching into an Irish brogue thick enough to land him guest roles in Mrs Brown’s Boy’s and Hardy Bucks.

It’s safe to say that Styles wouldn’t be out of place on Moore Street.

As Horan struggles to be heard above enthusiastic olé, olé, olé chants to rival the Ireland v Romania rallying cry of Italia 90 – when many of them were but a twinkle in their parents’ eyes – there’s a sense that even he hasn’t quite expected such a reception. “This is probably the worst we’ll ever sing”, the clearly overwhelmed 21-year-old comments, “we can’t hear a thing”.

That doesn’t concern the crowd though. From the gaggle of girls sporting coordinated One Direction t-shirts up in their seats in the Gods to the impeccably dressed pre-teen lads bopping along in their blazers, everyone is here – with whatever recording device they can find – to make midnight memories.

Nobody’s got time to worry about Zayn pain. After all, this could well be the last time they see their idols on stage.

The artists formerly known as X Factor 2010 third place boyband One Direction are now a seasoned four-piece outfit. They’re perfectly unpolished in their performance, managing to balance a perfect mix of health and safety warnings for the standing section and light-hearted inter song chatter with all the ease of a group who’ve been on the road longer than they’ve been off it.

And yet you can tell that while their enthusiasm and showmanship hasn’t waned they’re tired. One Direction have been solidly on the road for the guts of two years at this stage, with little or no time to simply live while they’re young.

They’ve done it happily, yes, but Malik’s departure doubtlessly served to highlight the little things in life they’ve missed out on: Horan hasn’t been home to Ireland since Christmas, while Tomlinson’s preparing to become a daddy.

Styles seems to know that something’s got to give too, but he’s not going to back down when there’s an audience to entertain: “We’ve been a band for five years” he quietens the crowd down to say, “but we wouldn’t be here if it wasn’t for all of you.”

His words are warm and genuine, but only serve to emphasise the fact that night changes are in the air.

Doom, gloom and talk of any impending split is kept to a minimum, though. Instead, there’s a special surprise in store as the band make a last minute change to the set list.

Swapping out crowd pleaser Diana for the newest track from Made in The AM, released less than 12 hours earlier on Spotify, is a master stroke.

Crowd participation isn’t a problem: they’ve already learned off the words in record time and belt it back at the band with ease.

Nobody knows if One Direction will ever be on the road again in Dublin.

And if this is to be the last time they’ll take to the Irish stage, the home crowd won’t let Horan and Co. bow out with anything less than a perfect goodbye.