It’s quite hard to find a book you quite simply can’t put down these days, but when I gave in to the Divergent rumblings on Tumblr, I discovered another rather decent Young Adult novel. 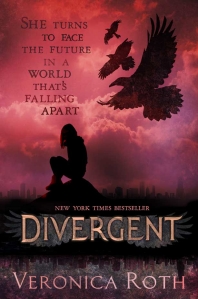 Divergent tells the tale of 16 year old Beatrice (Tris), who lives in a world that’s been divided into factions, so as to avoid war. The peoples of this futuristic society sorted themselves into groups, based on their perceptions of what was at the root of all evil, and in their 16th year, their children are given the opportunity to choose which faction they wish to spend their lives with. It’s all pretty simple, unless of course, you don’t really fit in anywhere. That’s when it’s dangerous. That’s when you, like Tris, are Divergent, and nobody else can ever know.

Veronica Roth’s work of dystopian fiction has regularly been held up against The Hunger Games, and is often described by dedicated ‘Tributes’ as a rip off of Suzanne Collins’ trilogy. I can see where they’re coming from (Girl must survive in life or death situation that she’s placed in by her rather odd society) but I’d argue that this book is jut that little bit different.

Indeed, it’s that slight deviation on the theme that dragged me in, and ultimately won me over: I enjoyed The Hunger Games, but I devoured Divergent. In fact, I enjoyed it so much, that for the first time in a rather long time, I didn’t turn to the last page for a sneak peek before I finished reading. I could never really connect with Katniss, but when I opened the page and met Tris, I instantly felt the pull.

Like many other works of YA fiction, Divergent is currently being adapted for the big screen, so if you’re going to read it, I suggest you do it long before the first trailer lands. When pitting the book against the box office, the novel always comes out on top for me, so I prefer to enjoy the story long before I have to put it out of my mind: It’s the only way I can ever really get to grips with cinematic re-tellings.

That said, Divergent’s got a pretty decent cast. Shailene Woodley takes the lead, while Kate Winslet stars as the intellectually superior villain, and then there’s British beauty Theo James as the mysterious Four. They’ve also drafted in the likes of Zoe Kravitz, Jai Courtney, Ray Stevenson, Ashley Judd and Mekhi Phifer, and with Snow White And The Huntsman writer Evan Daugherty helping to pen the script, it’s sure to be quite the adventure.

So, I suggest you avoid waiting for that bandwagon to roll into town. Go pick up a copy now and find out what all the fuss is about.

PS. There’s a sequel called Insurgent, and a third book on the way in October. Get reading.

2 responses to “Why you should be reading Divergent”