I’m not an avid football fan but it’s safe to say that I’ve managed to get through the past 12 years based on the knowledge gained from Fifa 98.

Yes, those evenings spent sitting front of a Playstation (the original one), listening to Blur’s Song 2 blasting as the game loaded certainly served me well.

As for the tendency to set up two player games and proceed to tackle both goal keepers until I’d get red cards? Well, I’m sure the answer to that question is some psychologist’s dream.

I’ve lived through five World Cup tournaments and have vivid memories of four of them. In 94 I spent my summer kitted out in a white t-shirt and shorts having developed an instant affection for Striker, the superb little mascot rolled out for football’s trip across the Atlantic.

My dad’s jersey didn’t live to see the end of the tournament. He burned it in a bin out the back garden the night we lost 2-0 to the Netherlands.

Fast forward to 98, I was rooting for France in the final and the only Ronaldo making the headlines was the Brazilian one.

Four years later we were screaming in the school gym as Robbie Keane sent Ireland through to the knockout stages, before sobbing our hearts out on the sofa after that penalty shoot out with Spain.

There ended my summer love affair with one Matt Holland.

In 2006 I didn’t pay too much attention, being honest, but 2010 will always be the most memorable given that I watched most of it in Sweden and lost my beloved dog Archer the day before the final.

This year we’re off to Brazil and while the world debates whether or not we should be watching given the political situation, chances are we’ll still end up tuning in. As the mammy said this morning, “sure isn’t it something to watch?”.

First things first, I’m a little bit devastated that Shakira isn’t singing the theme tune again. Waka Waka was a magnificent summer tune, which JLo and co can’t even begin to compete with.

Then there’s the issue of who to throw the oul patriotic weight behind.

In 2010 I was all about New Zealand, not least because they stood next to no chance of doing well but with no Kiwis making the grade this time I’m at the mercy of BuzzFeed quizzes and other ridiculous decision making alternatives.

I could always just go with Cameroon though. The jersey is quite frankly outstanding and marks them as clear winners in the fashion stakes. 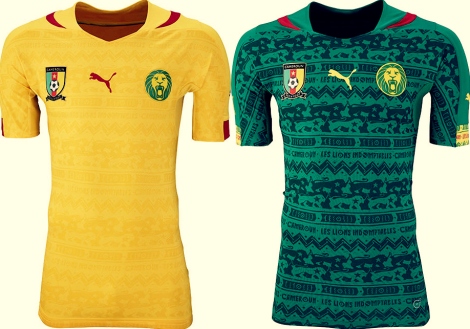 If you’re seeking football musings that are both intelligent and insightful  you’d be best to follow one @amyeustace during the tournament, but if you’re game for a laugh you can keep an eye on my timeline.

I do happen to understand how the game works, have a fair idea of who’ll do well and have no trouble pronouncing Bastian Schweinsteiger’s name (won’t be much use if he’s not fully fit to play though, will it?).

It’s a game of two halves at the end of the day. I might yet come up with some commentary that hits the back of the net.