It’s no secret that Ireland’s stray dog situation is pretty dire: Every year thousands of unwanted animals are put to sleep in the country’s dog pounds because there quite simply aren’t enough homes for them.

For bully breeds, mistakenly referred to as “those dangerous dogs” by the masses, the chances of getting out and getting a new home are slim, so how did two of these curious little creatures end up at the World Cup in Brazil this week?

Well, that’s a tale and a half.

Rosita began life (as we know it) in the South Dublin dog pound back in 2011. She was brought in as a stray with wobbly legs and within months in foster care (sourced by rescue group A Dog’s Life, who saved her and thousands of dogs just like her) she had completely lost the use of both her back legs with little or no explanation.

Many many visits to vets and specialist vets later, it transpired that Rosi had a degenerative spinal issue. However, she didn’t let it, or the cancer she was also subsequently diagnosed with, get in her way.

In fact, with the help of her foster parents Ninfa and Tony (and a whole host of wonderful mammies and daddies and babysitters), Rosita thrived and eventually settled herself down and became a permanent member of the family. The disabled dog became something of a local celebrity thanks to her wheels and even popped up in the national media. 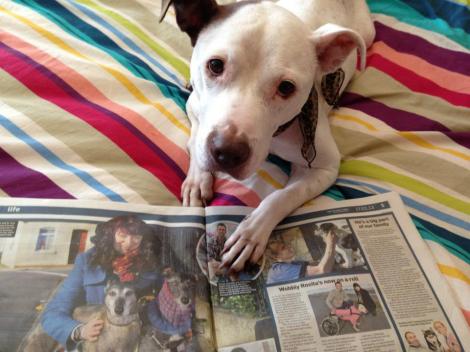 Rosita was one of the stars of my first Sunday Times Ireland feature.

The loving little dog overcame the cancer and even went on to become something of a foster mammy herself, helping many other pound pooches through that difficult transition from homelessness to forever sofa.

One such dog was Pancho, a young man who certainly made an impression on his new pal. 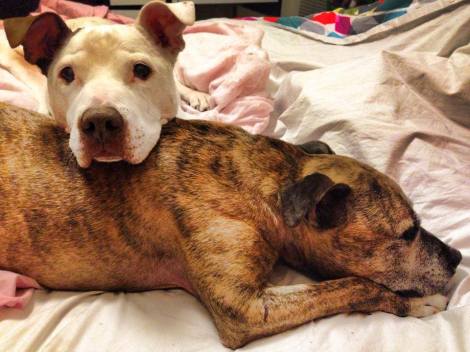 Can we keep him?

Rosita and Pancho became firm friends while he was in foster care and then, just when it seemed as though the pair were going to have to say goodbye, his adoption fell through. It wasn’t long before he became a permanent member of Rosi’s family unit.

When mammy and daddy decided to move to South America they knew they couldn’t go without the dogs so, with the Pet Passports in the bag, this incredible pair jetted off to their new home in Argentina.

Rosi eventually convinced Pancho to travel in his own crate.

It didn’t take the dogs long to settle in and they were absolutely loving life in the Southern Hemisphere when the opportunity for another adventure arose.

Mammy Ninfa hails from Honduras and when her home team made the World Cup finals the whole family decided to pack up the car and head off on a road trip.

Are we there yet Pancho?

Rosi managed to tick a few more countries off her list en route as herself and Pancho passed through Uruguay on their way to Brazil. She’s now been to 7 different nations and we wouldn’t put it past her to see a few more.

For now, she and Pancho are living it up in Brazil’s Portoalegre with their mam and dad.

It’s safe to say they’re hoping for a much better result in the next football match though.

You can keep up with their adventures and see many more wonderful photos on Rosita’s official Facebook page.

Author’s Note: Rosita came to my attention when I was doing research for a radio documentary which I produced and submitted for my MA thesis. I had the pleasure of meeting and interviewing her in her old home in Dublin and was utterly moved by her strength and determination.

One response to “From Death Row to Rio : Two Irish pound dogs are at The World Cup”