Super Bowl XLIX, or 49 for those who don’t do as the Romans do, sees the Seattle Seahawks take on the New England Patriots at the University of Phoenix Stadium in Arizona.

Millions of people across the globe will tune in to watch the game, jumping on the American football bandwagon for the sake of a red cup waving night in or out. Sure who could say no to a good sporting all-nighter eh?

You’re going to want to understand what’s going on to some extent though, right? So have can a novice bluff their way through the Bowl?

Take it from the girl who has picked it all up in bits and pieces since watching her first game back in 08 – when Eli Manning and the New York Giants deflated the Patriots’ hopes in the dying seconds of the game – it ain’t all that difficult.

The Super Bowl is the culmination of the American Football season. Teams (known as franchises – they’re actually just like big businesses) across the USA are split into two groups called conferences, which in turn make up the National Football League.

Trust me, merely knowing that there are two conferences is enough to convince most die-hard fans that you’re one of them.

SO HOW DO THEY SCORE A TOUCHDOWN?

Like any other game, the objective of American football is to get more points on the board and beat the other team. Problem is, getting from one end of the field (pitch) to the other isn’t quite that simple. 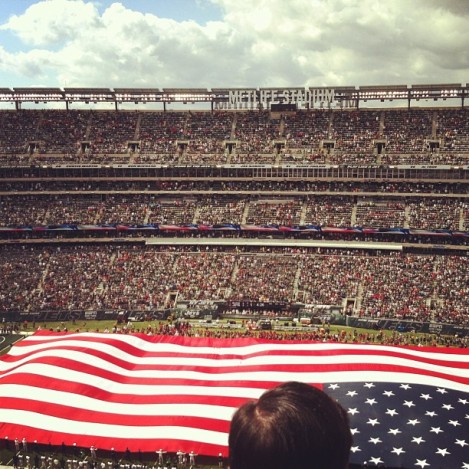 I’ve been at a real game. In a real stadium.

The team with the ball have four attempts called downs, in which to advance the ball down the field toward their opponent’s end zone. If they get those ten yards they get a first down and another four attempts. If they don’t, the other team gets the ball.

When it comes to scoring, don’t confuse a touchdown with a try. It’s worth six points and is usually followed by a one-point kick or an attempt to run or pass the ball into the end zone for a two-point conversion.

Field goals are worth 3 points and are generally taken if a team is within the opposition’s half and has made it all the way to fourth down. Again, in rugby terms, it’s like going for the drop goal when you know there ain’t a hope in hell of getting that ball over the line.

HOW ON EARTH DOES IT TAKE SO LONG TO PLAY A GAME?

The clock stops after an incomplete pass, when a player is tackled or when a player runs out of bounds. And as if that wasn’t enough, each team has three timeouts per half, which slow the game down even more.

That’s why it can often take almost three hours to play a 60-minute game.

Got all that? Thought not. At least you’ve tried.

HOW CAN I REALLY MAKE MYSELF SOUND SMART?

Well if you can throw out a few fun facts about this year’s season you’ll be doing well.

Take ‘Deflate Gate’ for example. It’s a personal favourite because it’s positively oozing with ball puns. The New England Patriots came under fire for allegedly trying to make the game balls a bit softer so they could throw ’em around with ease.

Bellowing BEAST MODE when Seattle Seahawks running back Marshawn Lynch’s name comes up in conversation is a pretty safe bet too.

This refers to the number 24’s superb skills on the field and most recently almost brought Twitter to a standstill as the Seahawks romped into this year’s Bowl. If you missed the game just mention how tense is was watching themselves and the Green Bay Packers fight it out as the clock ticked down.

Trust me, there’s nothing you can’t learn by typing the right things into a search engine.

This is vital, especially when watching a game that’s all about getting the ball deep in the end zone.

HOLD ON FOR HALF TIME

If you’re really not feeling the football but don’t want to head to bed there’s a Katy Perry/Lenny Kravitz half-time show. Oh and Idina Menzel will be letting it GO with the National Anthem before it all kicks off as well.

So learn a few facts, scream the word defence several times, mimic Denzel Washington in Remember the Titans and twenty-two, forty-three, HUT, never mind the Super Bowl, you’ll be good to go on any given Sunday.