Commissioning a second season of a superb standalone drama is a risky business so when ITV decided to give Broadchurch a second bite at the apple nobody was quite sure what would happen.

If you haven’t seen the brilliant original British drama starring David Tennant and Olivia Colman I won’t spoil it for you: It begins with the discovery of a young boy’s body at the bottom of a cliff and follows blow in DI Alec Hardy (Tennant) and local lass PC Ellie Miller (Colman) as they attempt to find out what happened to him.

I loved it SO much that I wrote about it several times. Once before it aired back in 2013, and again when I was wondering why the HELL people hadn’t seen it yet when it aired again in 2014. 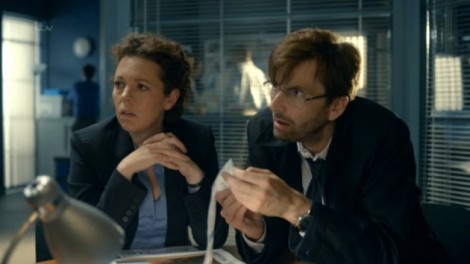 This relentless fangirling considered, I was rather unsure about tuning in for a second series. However, when I sat down to watch the first episode on TV3 just three weeks ago I found myself pleasantly surprised.

Actually no, scratch that. Elated is the word.

The utterly brilliant Broadchurch writers have taken everything that was wonderful about the first offering, put a terrific twist on it and maintained the magic that makes this mystery drama so delightful.

A superb new spine-tingling tale superbly supports the continuing turmoil faced by the central characters. It seems the conclusion we thought to be signed, sealed and all but delivered when last we saw that fateful beach isn’t quite so water tight.

And as if a nifty new plot wasn’t enough to whet the appetite, a whole host of new faces bring even more incredible acting talent to the table.

While Tennant, Coleman and the original cast remain utterly stellar, veteran actress Charlotte Rampling and Oscar nominated Without A Trace star Marianne Jean-Baptiste up the ante. These women are powerhouses and play as such.

Meanwhile, new ‘baddie’ James D’Arcy (who I almost fluffed this wonderful interview with thanks to a frightful Fruedian slip) broods on the sidelines, positively oozing intrigue.

Is he an innocent man? Or is he every bit as lethal as he looks? We’ll have to wait and see.

It’s the story and the storytelling that stands out though: That’s always been Broadchurch’s strength. Content is, as they say, king. Good actors need a decent script to work with, and my does Olivia Colman make the most of it yet again.

ALL of the BAFTAs, please.

Back in 2013 viewers were hooked on a tale that could take any number of twists and turns when they least expected it. Broadchurch continues to do just that with series of events that both excite and infuriate us as we sit open mouthed in front of our TV screens.

With each week comes a new mystery, with each twist a new torment both on and off-screen.

And as episode after episode throws up surprise after surprise you’d be forgiven for wondering whether Danny Latimer’s “killer” really did do it after all?

Catch Broadchurch on TV3 every Monday night at 10pm. Viewers in the UK can watch on ITV Monday nights from 9pm and if you’ve still got UTV it’s Monday at 9pm for you too.