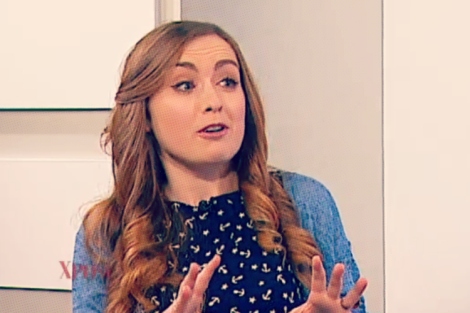 “Expect the unexpected” is a line we hear regularly enough but it’s not until the unexpected happens that you really appreciate just how much it rings true.

About a month ago I was utterly MISERABLE on New Year’s Eve, reeling from the second blow to my self esteem in less than a month and wondering just how on earth I was ever going to get back on my feet.

Now, just four weeks later, I’ve had the kind of Wednesday I could only have dreamed about. I woke up to discover that a really personal blog post I’d written about anxiety, depression and employment was being featured on Broadsheet.ie 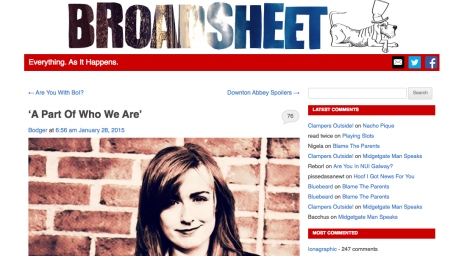 The influx of emails, tweets, Facebook messages and kind comments was incredible. I was genuinely moved to tears by the kindness and compassion of both strangers and my own friends and acquaintances. It’s rather humbling when people emerge from the woodwork years later to wish you well.

As if that wasn’t enough to make my day, I was asked to return to TV3 to talk about their new soap Red Rock on Xposé again.

Just a week ago I was positively delirious with excitement about being featured as a guest on the show for the first time: Tonight it felt twice as good to be back.

You can catch my chat about Red Rock right here from around the 13 minute mark. I’m not making quite so many odd faces this time. Sadly.

Here’s one for good measure though, so you’re not missing out. 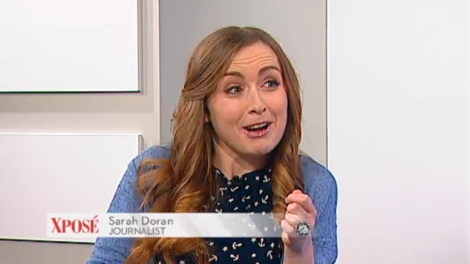 Definitely one to stick on the CV, ain’t it?

I don’t know what’s next for me. Some rather exciting offers have been made thanks to that all important blog post but nothing is set in stone.

What I DO know, however, is that I’ve finally found my feet and I’m about to head off on my greatest adventure yet. I’m taking up a placement in London for the next fortnight and then, well, who knows?

And I also know I couldn’t have done any of it without the wonderful people who have stood behind me. So here’s the Oscar acceptance speech I’ll never get to make:

I’d like to thank my mother, my dog, my friends (in particular Catherine Dennehy, Jackie Fox, Claire Duffy, Ciara Browne, Jessica Keogh and my wonderful Wilkins Micawber), my cousins Dave, Emma, Ally, John and the Dawnay clan, Linda Killeen who pulled that stick out of my hand twice and changed my life in the process, all the wonderful staff at Pobalscoil Neasáin who took a 15 year old shell and made her into a media monster and the Class of 2008 for being Bal-bleedin-deadly.

Thanks to Gareth Connolly, Conor Hurley, Killian McKenna, Henry Elder and Hendrik Ahlers for minding a mini ginger from the northside in Bulgaria, the Belfield FM Late Night Breakfast crew and Eoghan O’Braonain for making me a broadcast monster, the University Observer 10-11 team for making me who I am today, Nixon (you know who you are) for bringing out my inner Frost, The College Tribune crew, the HPIR classes of 2010, 2011 and 2012 and the DCU MAJ, MPS and FM media mafia.

I owe a massive thanks to Caroline Foran for making me the most important offer of my life, Sheena McGinley for giving me something to aspire to, Emma Alken for always listening and never allowing me to say sorry, Úna Kavanagh for always understanding, Sinead Burke for always being inspiring, Thomas Kelly, Richie Oakley and Colin Coyle for taking me in for seven superb days at the Sunday Times Ireland, Michael Freeman for taking a chance on a freelance TV addict, Today FM for letting me loose on the national airwaves, the incredible network of Irish Bloggers who always have my back, the Irish YouTubers who are so endlessly enthusiastic, TV3’s Ireland AM team for putting me through my paces, and of course, the Xposé team for making my dream come true.

Last, but by no means least, I need to thank the staff of SpunOut.ie, who made the most enormous impact on my life in such a short space of time. Working with Tricia Purcell, Jack Deacon, Oisín McKenna, Ciaran D’Arcy, Máire Rowland, John Buckley, Alan O’Mara, Ian Power and Niamh Farrell was an absolute privilege and it opened my eyes.

The conversations I had on the seventh floor of SpunOut Towers were among some of the most minuscule and momentous: Thank you to all of you for being there during quite possibly one of the most important times in my life.

And thanks to one person in particular who’ll probably never really understand the irreversible impact they’ve had on me, simply by being nice to me in a way someone else never had been. Never have I been so oddly glad I felt the urge to boil a kettle on a Thursday morning. Timing really is everything.

They say people come into your life for a reason, a season or a lifetime. Heaven knows the people I met in that office were oh so influential in changing mine.

I know I’ve forgotten to thank too many amazing individuals so if you feel as though you should be on that list chances are you are. You’re just so important that I don’t even need to write your name.

Now that I’ve driven you all sufficiently mad with the blog posts I’ll be signing off for a little while.

London is calling and I quite simply can’t wait to take on the challenge.

2 responses to “What a difference a Wednesday makes”