This time last year I was sitting in Dublin airport with a caramel latté and a copies of Empire and SFX, being the very definition of “notions” because I was on a two week jaunt over to London to do a bit of work experience and had next to nothing to lose.

A disheartened and depressed 25 year old film and TV journalist who was still reeling from a bad break-up stepped onto an aeroplane and somehow, someone else stepped off it.

I don’t know if it was the familiarity of being in Heathrow on my own, as I had been for so many junkets during my entertainment.ie days, or buzz from all those ‘hearts’ on the Instagram selfies I had a serious penchant for snapping, but something inside me screamed “you’ve got to take this and make the most of it”. 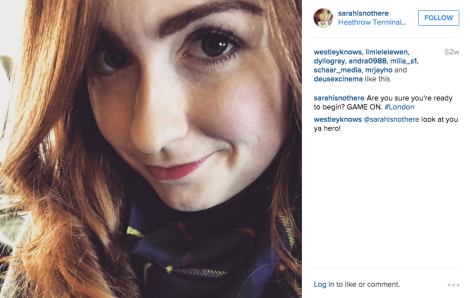 Within two days of stepping off that plane I knew I wasn’t going home. And 12 months later, I’m still here, with a permanent job, a decent place to live, and a circle of supportive colleagues, friends and family.

I’ve gone gallivanting to Glasgow for Outlander, exchanged pleasantries with Poldark, had a quick word with Harrison Ford on the Star Wars red carpet, gabbled on with Graham Norton, live-tweeted the Eurovision, watched endless episodes of Doctor Who and had many other adventures I never dreamed I’d be able to have.

I never wanted to have to leave Dublin, you see. And in all honesty, I didn’t HAVE to go. There was work for me, it just wasn’t the kind of work I really wanted. That wasn’t the government’s fault, or the economy’s – it just comes with the entertainment territory.

Dublin will never be the LA or London of media, much like it’ll never be THE place to be if you want to study orangutans in their natural environment like an old friend is somewhere in Borneo.

I’d be lying if I said getting to where I am today is easy, though. And day after day after day I spy newcomers on Facebook groups and Twitter popping up to say they’re making the move and need advice on how best to go about setting up and settling down in London town.

Take it from someone on their second London home, and only in a permanent job less than 3 months after 9 spent freelancing and franticly firing off CVs – it’s not easy. But it is entirely doable. And that’s why I’m going to share my own little pearls of wisdom. If you can call them that.

Now I’m no authority, I’m not here HALF as long as most Irish folk, but it’s all relatively fresh in my memory. So if you want to know how to find a place to live, get a National Insurance Number, set up a bank account (minus the official bulls**t) or find some new friends, feel free to follow the blog for all my weird musings.

Because as the great High School Musical once said, “we’re all in this together”. And sure aren’t we supposed to be a fierce friendly bunch?